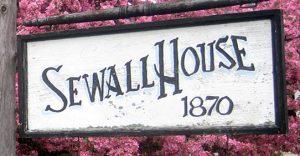 In the world of yoga retreats now exploding globally, there is a small personalized yoga  getaway experience in Maine run by a yoga instructor who has been teaching for over thirty years in New York City to many and varied students and environments. That is not what sets the historic Sewall House apart. Read about this one-of-a-kind Maine experience. Ask us about visiting Maine or share comments. 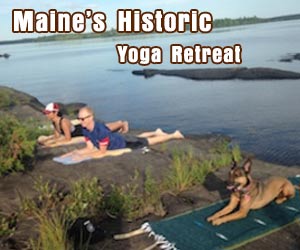 In the 1870’s, soon after the large farmhouse had been completed, one of the original guests also came for healing and for experiencing the rich nature northern Maine has to offer as it does to its guests today.

The area, chosen top ten in the United States by Lonely Planet in 2013 for its exquisite beauty, is where a young college student named Theodore Roosevelt (who would have a great impact on conservation through the National Parks) forged forests, rivers, mountains and a lifelong friendship with a nature guide named William Sewall. Sewall’s parents had been one of two families founding the town. He had learned about nature from the local native Americans starting at age three. In 1997 Sewall’s great grand-daughter, ahead of the great yoga tidal wave to follow, purchased the house, which had always been in the family but now sat empty for 18 months, its contents to be auctioned and the house put on the market. Donna Sewall Davidge (Amrita) started the retreat in 1997 in her great grandfather’s home, hoping she could reignite the tradition of hospitality, life changing experiences and friendships. 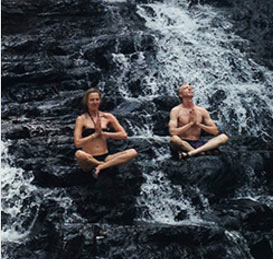 The retreat operates from May to October, as many seasonal places in Maine. It offers morning meditation by a river, weather providing, followed by yoga in the studio, a large shed attached to the house, conveniently transformed into the yoga studio, sauna and massage sanctuary. Located in the small town of Island Falls off the beaten path, there are 2 lakes nearby for kayaking, swimming and afternoon jaunts down the lake to do yoga on an island which is actually a rock ledge. Three meals a day are prepared and served family style, with chefs over the years and dishes so delightful that even non-vegetarians return for more or ask for recipes.
This season special offerings, besides the ongoing daily schedule, which means you can arrive and depart on dates of your choice, are three weeks with an acclaimed chef who has appeared on Martha Stewart and the Food Network, a workshop on how to teach children yoga, an annual yoga and writing retreat and paddleboard yoga weekend. Sewall House also offers 200 hour yoga teacher training limited to five participants. Like all the retreats, each guest has their own bedroom unless sharing with a friend, family member or partner/spouse. 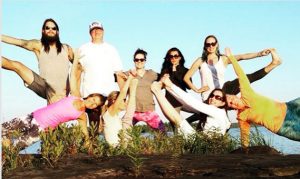 Porch sitting on the same porch William Sewall remembers first laying eyes on the young bespeckled college student approaching, feeble from asthma, is a favored activity, or lulling in a hammock. Like the young Roosevelt, many guests leave feeling that they have turned over a new leaf on their health, gained newfound strength, as well as friendships, and look forward to their next visit. * TR did 3 consecutive fall expeditions to Sewall House. For more information call the Sewall House Inn toll-free 888-235-2395 or 646-316-5151 or visit them online at www.sewallhouse.com.