The Kennebunk Inn is a Historic Inn and Restaurant located in the beautiful quaint village of Kennebunk. Kennebunk beaches are close by and shops are just a short walk from inn. This chef-owned and operated inn is an excellent choice your Maine coast adventure.

The Kennebunk Inn, 45 Main Street, Kennebunk, ME 04043 | 207-985-3351
If you are searching for an historic inn with affordable class and fabulous food in southern coastal Maine - The Kennebunk Inn is the place. Beautiful beaches, nature preserves, museums, galleries, antique shops, and more. We look forward to sharing our special place in the land of the pointed firs.
Visit The Kennebunk Inn Website

If you like Lobster, historic inns and impeccable service, be sure to visit the Kennebunk Inn in Maine. Ask us about Kennebunk Maine or share comments. To feature your Maine business, contact us. 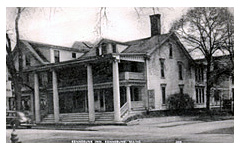 The primary building of what is now known as The Kennebunk Inn was originally built as a private residence by Phineas Cole in 1799, less than thirty years after the founding of the Republic. In 1928, George Baitler converted the private home to a hotel known as “The Tavern,” adding a 21/2 story wing to produce a total of 50 guest rooms. In the late 1930s, the name of the hotel was changed to The Kennebunk Inn. 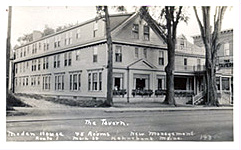 A distinctive feature of The Kennebunk Inn is its “haunted heritage.” Rumor has it that Silas Perkins, one of the Inn’s clerks who passed away in the mid-twentieth century, continues to inhabit his place of former employment—his presence occasionally announced by flying or falling wine glasses and other objects.

The Inn’s ownership has included several families over the years. In January 2003, Drs. David and Sue Horner and their daughter and son-in-law, Shanna Horner O’Hea and Brian O’Hea, acquired The Inn. Long-time summer residents of Harpswell, Maine, the Horners’ careers have focused on higher education. In 1979, David became the youngest college president in America when he was appointed the president of Rhode Island’s Barrington College at age 29. From 1987-2004, he served as president of North Park University in Chicago. Sue has taught and published in the areas of women’s studies and religion, and has lectured across the United States as well as in Europe and Australia.

Brian and Shanna are responsible for the day-to-day operations of the Inn as the Innkeepers ~ Chefs. A native of Long Island, New York (and a lifelong fan of the Yankees), Brian grew up in a three-generation New York City police family. Shanna (raised in a die-hard The Historic Kennebunk Inn Lodging Red Sox family) joined her father and mother on the campus of North Park University as an undergraduate where she studied art and marketing. Today, the Inn’s reputation has been built on its rich historical heritage, the civic and educational backgrounds of its ownership, and Shanna’s and Brian’s culinary creativity and passion. 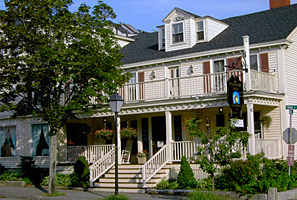 In its over two hundred year history, the Inn has survived and supported both private and public purposes through forty-three United States Presidents (one of whom, President George Bush, resides just a few miles away), numerous wars, and both good and bad economic times. The Kennebunk Inn is proud to have a part in both the history and future of what James Taylor aptly refers to as “the great state of Maine”.

* Some of the historical information is taken from the research of Richard T. Eisenhour, Curator, Brick Store Museum.