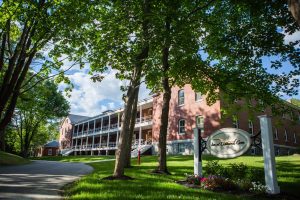 Maine’s amazing Inn At Diamond Cove was at one time Fort McKinley. The Inn at Diamond Cove is housed in Fort McKinley’s former US Army Barracks that overlooks the former parade grounds of this scenic Maine island. Life is slower. And quieter. Cars are not permitted anywhere on the Island. Transportation around Big Diamond Island is via Golf Carts and Bicycles. Big Diamond Island’s Fort McKinley was once a US Military property important in the defense of the United States. Many of the former army structures have been restored and are now homes with historic detail and character.

Prior to being an army base, Diamond Cove was a famous artist retreat in the late 1800’s. American literary greats such as Henry Wadsworth Longfellow and Harriet Beecher Stowe spent time living on this tiny Casco Bay island. Today, Inn at Diamond Cove is managed by Portland Harbor Hotel – Hart Hotels and offers superb dining and lodging accommodations. This restored Army Barrack originally opened in 1841. The Inn reopened in May of 2015 with 44 luxurious, yet simply appointed guestrooms and suites. The building has been restored with meticulous attention to historic detail and with the intent on preserving its original character. An amazing place to visit – world’s away but just a short ferry ride from downtown Portland. Ask us about Inn At Diamond Cove, or share Maine business news and reviews. To feature your Maine business, contact us.